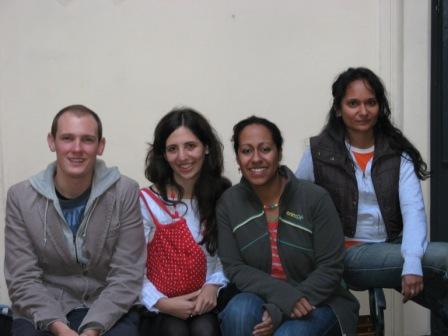 Well it took three weeks but I finally managed to aquire a hangover in Buenos Aires! This has definitely been the best week here so far though. Thursday night was a really nice chilled out affair, four of us went to dinner and out for a few drinks in Palermo. Typically I didn’t get home until 2am which considering Craig and I had a spanish exam at 9am the following day was maybe not the brightest idea. Anyway we totally aced the test anyway and next week we start Intermedio Uno!

We watched a really good Argentian film called Valentin by Rodrigo Noya in school on Friday afternoon. It’s the story of a eight year old boy who lives with his elderly grandmother in Buenos Aires in the 1960s. The kid in the film is just brilliant, so funny and so cute but the story is quite moving. We watched it with Spanish subtitles which definitely helped me follow most of what was going on but I think I’ll try and getÂ hold of a copy to watch again with the English ones!

Last night was a fairly big one. Thirteen of us ended going out for a meal, two brits,Â one kiwi, six americans, one czech, one austrian and a south african. Chris had booked a table at a really gorgoues restaurant called Milion in Recoleta and we ended up with our own private room. Then there were beers in an Irish pub until around 2am at which point we hopped off to a small local club somewhere in town to dance. There was a lot of crazy salsa and Meringue music and downstairs there was some bizarre equivalent of line dancing but salsa style being led by a group of ridiculous muscled male dancers on stage. Craig and I tried it out but gave up in the end, it was pretty damn complicated, either that or maybe I’d just had too many beers by that point. A pit stop for empanadas on the way home and Miss Linney crawled into her bed at 6.30am. I didn’t get up until one this afternoon. After sufficient coffee and cereal I sauntered out into the sunshine (sunglasses firmly on) and strolled around the markets in my barrio before settling down outside a cafe to drink Licuardos and watch the world go by. And I’m doing it all over again tonight as it’s my GermanÂ friend Basha’s last night in Argentina! And then tomorrow I’m getting stuck in to the football madness and going to see Boca Juniors vs Racing!

This entry was posted in Argentina, Buenos Aires, dancing. Bookmark the permalink.