bright lights in the big city

I have reached the final country of my trip, Malaysia and am currently in Kuala Lumpur. I can barely believe that it has been 13 months since I took my first flight to Buenos Aires, last April a year seemed such a huge length of length of time and now all to soon it is drawing to an end. Still, I have some serious beach and jungle action left to go before I head home! I arrived at the hostel in KL on Monday afternoon to find that my brother had managed to arrive before me, having hopped through the islands of Thailand and Malaysia whilst I was happily pottering around the Mekong and Cambodia. I also had a mini reunion with Jill who I hung out with in Pune, and Bron who James and I travelled with in Laos who is back in Asia en route to Europe. I love travelling reunions while your away!

Kuala Lumpur is a really interesting city, it seems far more quiet and civilised after cities like Saigon and Hanoi. The motorbike has all but vanished which has made road crossing a litle problematic. With your average throng of motorbikes it’s not a problem. You walk, they swerve – everyone is happy. In KL there are a lot of cars and huge traffic congestion but it all seems to travel fairly fast and cars don’t tend to swerve around you…

The city is fairly compact, hot, humid with an electic mix of Malay, Indian and Chinese inhabitants. There are mosques, catholic churches, Indian restaurants, monorails, markets full of fake Gucci handbags, enormous shopping malls with Chanel, Topshop and M&Ss, rice porridge with ginger and chicken for lunch, everyone seems to speak English, there is a 7-Eleven on almost every street and the skyline is ringed with retro-looking skyscrapers. Towering above them all are the dizzying heights of the Petronas Twin Towers and the KL Tower, two of the world’s highest buildings.

We went up to the Petronas towers out first morning to get one of the free tickets for the skybridge that connects the two towers about 100 meters up. It is a little bit of an anti-climax, a big corridor stretching between two towers that are fairly impossible to see from within and beforehand you have to don a pair of very sexy 3D glasses to watch a publicity video on the wonders of Petronas, the oil giant that built the tower. It was far more entertaining walking around the park area and paddling pool behind the building and taking comedy photos of the towers from the base.

Yesterday evening a group of us went up to the observation gallery of the KL tower which stands on a hill in the centre of the city and that has really spectacular views after sunset as the sky darkens and the cityscape begins to illuminate below you. We zipped across to Chinatown for dinner and ended up in the Reggae bar which was huge amounts of fun between the hula hoops-on-fire show, the crazy dancing tourists, lady boy waitress, the amourous bar owner Robert, the two best games of pool I have ever played, the jugs of cocktails and playing pub golf with plastic balls and clubs. Even better, McDonalds was still open at 4am on the way home! Needless to say today has not been very productive. 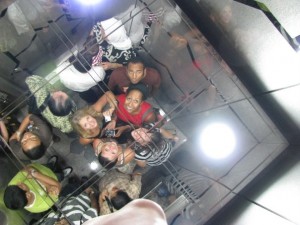 This entry was posted in Malaysia. Bookmark the permalink.