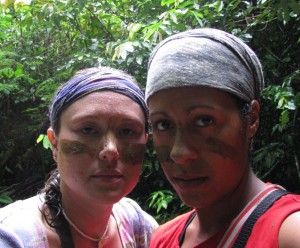 Bron and I bade farewell to the others and caught what has tho be the best, most comfortable public transport in the whole of SE Asia along wide, wonderfully smooth tarmac highways up to Jeratut where we had a scenic three hour boat ride along the fringes of Taman Negara National Park where we’d decided to stop for a day en route to the islands. As we only planned to spend one full day in the park we decided to get our money’s worth and have a jam packed jungle day of fun. After breakfast on the floating restaurants down on the river we caught a boat over to the entrance and set off through the jungle to the world’s longest canopy walk. It is a fantastic swaying bridge suspended in the canopy about 40 metres above the ground and the sections are 450m in total length, worthy of an Indiana Jones movie certainly and with fantastic views across the jungle canopy from the platforms.

Taman Negara is the world’s oldest rain forest which makes it roughly 130 million years old, give or take a millenia or two. Huge trees tower above you, giant ants scurry around the forest floor, the sounds of geckos and birds echo through the dense foliage and far away from prying eyes tigers and wild boar lurk about. Sadly we didn’t see a tiger but we did spot two wild pigs trotting through the entrance area as we were eating cookies outside the souvenir shop! After the canopy it was only a 2.6km walk to Ear cave. Somehow, due to the steep up and down paths riddled with tree roots, a torrential downpour, a prolonged photo stop by on the park’s largest trees and several slides it took us nearly 90 minutes to reach the cave.

By this time we were absolutely filthy, covered in mud and thoroughly damp but with that wonderful dismissive-ness that comes from being dirty enough not to care. It was a rough and slippery scramble to get into the cave with our torches. We went in just far enough to see the colonies of cute furry bats clinging to the overhangs with tiny clawed feet and inhale the unmistakable stench of piles of guano! It was getting late so we made our way out and managed to get back to the village before dark.

I must have picked up a few leeches on the way back as when I took off my trousers my feet and leg were covered in blood – nice! That evening after dinner we went on a night walk with a guided group. Sadly the six or so British 18-year old backpackers could not grasp the concept of walking and talking quietly to maximise the chances of spotting the wildlife. After the guide had asked them repeatedly to be quiet I asked them rather curtly to attempt to talk a little more quietly and the girl just rolled her eyes at me. Seriously, youngsters these days have absolutely no respect! We did see a green tree snake, a viper about a foot above my head, wood scorpions, huge furry spiders, massive stick insects and a beautiful flower called a one night stand which only blooms at night. It was 11pm by the time we made it back to our little dorm bungalow, muddy, damp, dishevelled but nicely jungled out!

This entry was posted in Malaysia, trekking, wildlife. Bookmark the permalink.