easy riders and the crazy house

Well having gone our separate ways James and I ended up arriving in Dalat in the Central Highlands of Vietnam on the same afternoon which was a good enough excuse for me to book us into a slightly nicer hotel with a jacuzzi shower. How have I managed thus far without one, they are the most wonderful inventions. That and the hotel had a truly enormous breakfast spread of passion fruit, pineapple, dragon fruit, baguettes, peanut butter and eggs, definitely worth $10 each for the night.

Dalat is Vietnam’s no. 1 honeymoon spot and looks very different to the rest of the country. It has a cool climate and is set up in pine forest mountains and feels bizarrely like stumbling on a mini Asian-influenced region of the Alps. The centre of town surrounds a peaceful lake about 2km along with locals fishing and jogging and Vietnamese tourists out in pedalos shaped like giant swans or taking horse drawn carriage rides along the road alongside the golf course.

In the evening we went to find the Easy Riders of Dalat, a ever-growing group of freelance motorbike drivers who take Western tourists (apparently the local tourists like to do things in big tour buses only) zooming around the area on their bikes for a handsome amount of US dollars. They hang out drinking beer in the Peace Cafe in their bright blue Easy Rider jackets and fairly soon we had sorted a trip for both of us for the following day. The trip was a lot of fun and both our drivers were really nice guys, I was one the back of Thai’s bike and James on Renee’s. Most of the bikes in Vietnam seem to be Honda dreams, they are in Thai’s words “pieces of shit but cheap and easy to buy!” We began the day by visiting the most bubblegum coloured theme park like Buddhist temple I’ve seen yet in Asia, the Vietnamese do love their kitsch and there is no such think as overdoing the decoration.

The gardens to the side of the temple housed a huge brightly coloured dragon that wouldn’t have looked out of place with a slide down it’s back in a children’s playground. It was kind of cool. We saw a lot of the countryside with pine forests on the slopes above the road, a thicker denser jungle forest below.

We stopped off to see vegetable gardens, strawberry fields, flower farms in huge glasshouses, a mushroom farm (weirdly looked like a scene from ‘Alien’ with suspended lines of round pod sacks hanging in a damp room from which they cultivate the fungi), silkworms and a silkworm factory. Also to James’ delight found our first impressively beautiful waterfall in SE Asia, not easy in the dry season. The walk down to Elephant falls was muddy, slippery and involved plenty of scrambling but was worth it for the view of the falls framed by the trees.

We had a very cheap and very good lunch on a balcony restaurant overlooking the valley and the coffee plantations and chatting to our Easy Riders. Thai was very impressed we were both travelling on our own funds and not our parent’s. “Vietnamese children are different, they are always asking their parents for money,” he commented darkly. We finished the day off at the Crazy House in town. To be honest I think crazy is an understatement, imagine Gaudi extremely high on acid, overdosed on Vietnamese kitsch and inspired by a combination of gothic architecture and the Brothers Grimm,

let his imagination loose in wire and plaster in the middle of Dalat. There are winding walkways in yellow and grey, giant giraffe heads, huge wire spider webs, low ceilings, melted turrets and everywhere twists and turns that connect the strangely themed rooms. Hang Viet Nga is the woman who designed and built the Crazy House and who is still building it, she has managed to avoid any political criticism and discouragement as her father was helpfully ‘Uncle Ho’s’ successor, so she has been allowed free reigns for her creative ambitions. You can actually stay in there, in rooms with strange globular shaped beds in corners, mirrored ceilings and giant kangaroos or bears with red light bulb eyes to keep you company. In the designers words: “Living in the Da Lat, the surrounding wilderness inspired me to focus on nature.” Well maybe those giant swan pedalos on the lake were a little strange but seriously? All very cool, but you wouldn’t want to sleep there! 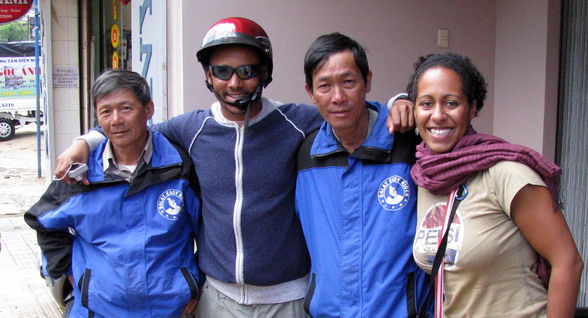 This entry was posted in activities, Vietnam. Bookmark the permalink.