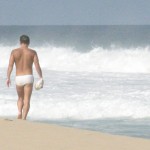 Rio is such a city of contrasts. One minute you are walking past Louis Vitton shops and stylish cafes in Ipanema and then the same evening you are 10 minutes away down the road in one of the biggest clubs in the favela of Rochina practically next door. Clubbing in the favela was definately an interesting experience, on one level it’s just a really huge club playing brazilian and american music, but at the same time we have all these enormous Brazilian bouncer guys with the groups of travellers to make sure that we got in and out safely, so a little bit out of the ordinary! The next day I also went on a favela tour of Rochina which was one of the most bizarre excursions I’ve done in south america.

Rochina is the biggest and oldest favela in Rio, 80 years old with 200,000 inhabitants, they hook up their own cables to the telegraph poles with the result that every one has a explosion of wires protruding from it; clubs, shops, internet cafes, everything is in the favela. Three main gangs control all the Rio favelas and this one belonged to A.D.A. amigos do amigos. The police are not allowed in so there is usually a group of them a few streets down from where the favela begins. So we drove past the policeman and then we all had to hop on the back of a motorbike (mototaxi) to get whisked all the way up the windy road to the top of Rochina…so much fun! From there we walked in a group, with the guide, past a guy carrying the world’s shinest machine gun (he must polish that thing all day long) and into the maze of tiny streets, rubbish, and mish mash of houses. We saw at least 4 or 5 guys with machine guns, they are the 3000 or so soldiers of A.D.A. that patrol the favelas. Bizarrely by the end of the tour their presence was strangely comforting, apparently very little, if any, crime happens inside the favelas as the drug gangs police them so tightly. Unfortunately though, the occaisional police raids or attacks from rival gangs tend to preciptate gun fights and that is when the locals get caught in the cross fire. We visited the house of one of the graffiti artists, brought banana cake in the bakery, chatted to lots of the kids and went to visit a day care centre that is funded by the tourist money now coming into the area. Really interesting day!

My final day in Rio was finally blessed with clear blue skies and no clouds, so after a morning drinking coconut milk on Ipanema beach, it was perfect to round off the Rio experience with the obligatory visits to Corcovado (Christ the Redeemer) and Sugar Loaf Mountain. Both are pretty spectacular in themselves and also for the views that you have of Rio. From the Corcovado the huge white, grey mosaic out-stretched arms tower on top of a 710 metre hill with views all around Rio. From here we went across town to catch the cable car up to Sugar Loaf mountain to watch the sunset over the centre and the lights start to twinkle along Copacabana beach.

This entry was posted in Brazil, dancing. Bookmark the permalink.