Just when you think you cannot stand the rain any longer and silently curse this place under your breath having had to run for shelter into an internet cafe after slipping on a sodden smear of dog shit in your flip flops, everything changes. You emerge an hour later to find the rain has stopped, the sun is shining through the clouds onto the cobbled streets in Palermo, the leaves just starting to turn gold andÂ just like that, you fall in love with Buenas Aires all over again. It’s a place where popping into a shop to ask about buying stamps leads to a fifteen minute chat about where you are from, what you’re doing and how you are enjoying the city; when you end up sitting outside a cafe in the early evening to do your homework and the owner comes out to adjust the position of the lights so you can see better; where dog walkers wrestle with ten huge beasts along the streets at 8am in the morning and where you can pop out for Mexican food at midnight and find the restaurants heaving with life.

This week has been fairly dance-tastic! Nero and I have a new playmate in our class this week, Craig who’s from Wigan. Unfortunately having two brits in one class has significantly lowered the tone of the general conversation, the first and last time I try to explain the double meaing of “cuning linguist” in a spanish class. It has been very funny though and luckily our teacher Tali is lovelyÂ andÂ very tolerant!Â Craig and Nero got roped into our second visit to Tango lessons, Taral and I got to do the whole foot kicking thing which was very funny although things definitely got more complicated.

Â Then Tuesday night we randomly orgnaised a wine and salsa evening in Taral’s flat with his Venezuelan housemate Cristian, who teaches Salsa. As we had more girls I can now salsa as a boy or as a girl, some serious gender confusion going on here! It also randomly turns out that Taral’s sister is Asne Seierstad who wrote The Bookseller of Kabul, a present I got a few years ago and really enjoyed! 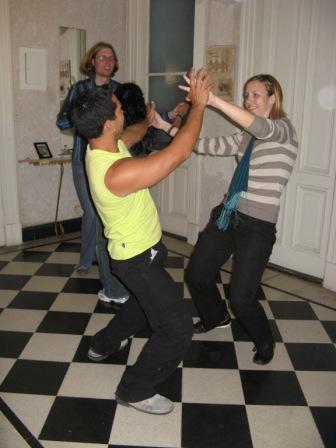 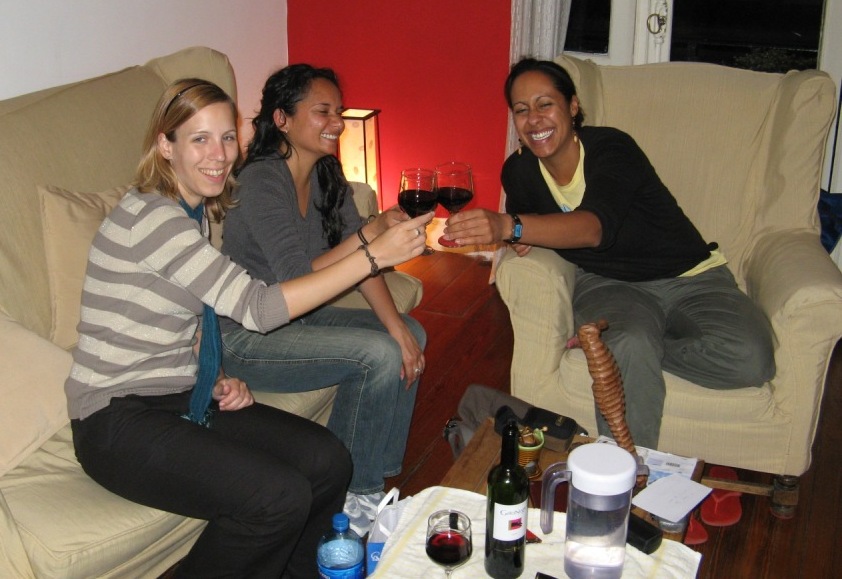 Last night we checked out a club called Opera Bay which has this wednesday night after-work scene. It was like being in a bar in Canary Wharf on a Friday night. Lots of guys in suits all over the place but it was very entertaining that the boys got all suited up so they could get in. Chris, who’s from California, looked particularly mafioso in his get up! We leftÂ earlyish and walked to Recoleta for Mexican food. We ended up having an rather loud hour long discussion as Chris had ben eyeing up one fo the girls on a table next to us and we were debating the best way for him to approach her. Eventually he goes up to bar to give the waitress his number on a napkin (yeah, so we didn’t come up with anything hugely original!) to take over but while he’s explaining all this in Spanish the girl and her friends are leaving. So Nero nabs her by the door and asks her if she has a boyfriend. She simles and says “yes, he’s called Chris too!” So it turns out they clearly spoke english and overheard most of the debate. Ah well, I don’t think it’s entirely disuaded Chris from perservering with the local girls!

This entry was posted in Argentina, Buenos Aires, dancing. Bookmark the permalink.