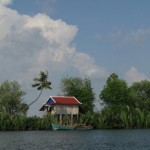 Cambodia is getting hotter and hotter. The locals have a remarkably simple way of dealing with this. They get up at the crack of dawn, eat and fuss about until about 10am when they disappear into shaded hammocks and enter a partially comatose state until 4 or 5pm in the afternoon when things begin to cool down. The three of us have not quite managed to emulate this skill. Generally by the time we are awake, up and breakfasted it has become the hottest part of the day so there has been much sweating and Rob’s arm got so burnt the other day that if he rolls up his sleeve it looks like a nepolitan ice cream!

We left Snookville and got a very small minibus to the riverside town of Kampot which is a very sleepy town with wide streets, palm trees along the river front, small restaurants and cafes, prowling night dogs, a militant ant population and absolutely no street lighting after dark.

There were some lovely old colonial buildings below the centre and a fascinating bridge in three mismatched parts (one French, one Vietnamese and one Cambodian) and two different heights. On our second day we took a trip up to Bokor Hill Station, a former retreat during French colonial times and used as a major strategic stronghold for the Vietnamese and the Khmer Rouge in more recent decades. The view from the top was pretty impressive, the station stands at 1080m and drops straight back down to sea level, we could see the coastline stretching out in front of us. All that remains now are burnt out decaying ruins including the former palace, casino, church and water tower. Walking through the abandoned buildings with the clouds rolling over the hill top outside the whole place was a little spooky, shades of The Shining and the water tower looked like a stage prop from War of the Worlds. After lunch we had a short,rather uneventful walk through the jungle on our way back to sea level and then hopped on a wobbly wooden boat which took us the scenic one hour route back down the Kampot river into town. 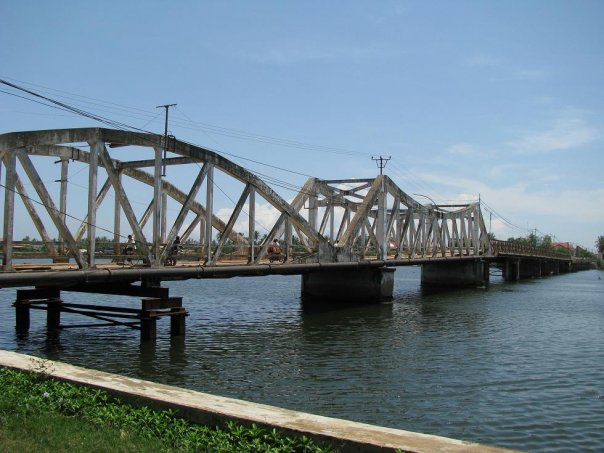 And as for the pepper, Kampot is known for its pepper, and I have to say, it is probably the best pepper I have ever tasted.

This entry was posted in Cambodia, history. Bookmark the permalink.