the vietnamese prostitutes of Apocalypse Now 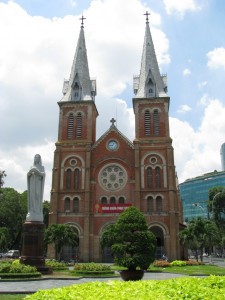 We finally had to leave the idyllic beaches of Phu Quoc and head back to the big bad city of Saigon. Mary had to get moving into Cambodia so Mika and I met up with an English guy, Rob, and some of the guys he was travelling with and with the influence of that many Brits together in a city, the next two days involved many, many beers, a thoroughly strange pub quiz, games of pool, hanging out in the Guns ‘n’ Roses bar and a visit to a terrible club called Apocalypse Now. Well actually the club was quite funny but it was full of aged white-haired men dancing to cheesy pop music with tiny Vietnamese prostitutes…nice!

We did manage to make it out to the Cu Chi tunnels outside the city which are fascinating but the tour bus we went on was the final straw for both of us. By the time the guide had introduced himself with a patter of terrible jokes, told us all we could call him John Wayne and put stickers on each of us, we decided this was the very last organised tour we were taking in the country. The tunnels themselves are interesting though; the were first constructed by the Vietnamese in resistance to the French rule in Vietnam and then during the war they were extended to cover about 250km underground, three levels, ranging from 80cm to 70cm in width and 1.2 metres high. 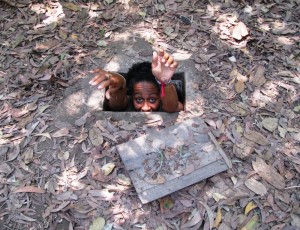 They enabled the Viet Cong to hide, move supplies and people from the Ho Chi Minh trails in Cambodia and throughout the south of Vietnam. We got to crawl and scramble through about 100 metres of original tunnel which was very dark and very cramped. Clearly a career in subterranean communism is not for me.

The strangest thing was the propaganda video that we watched afterwards, which did it’s best to glamorise the VC resistance showing them tirelessly working in the fields, digging more tunnels and enjoying relaxed games of cards. The commentator proudly announced that whatever happened they were always coming up with new ways to kill American soldiers. Military spin, it seems, never made it as far as SE Asia.

This entry was posted in Vietnam. Bookmark the permalink.