too much tourist touting

I’ve got to be honest, not loving Jodhpur. It’s loud, noisy, rude, bustling, dusty and totally lacks the charm, for me, of all the other places I’ve visited in Rajasthan. The rickshaws are quite entertaining though, they all look like they’ve been contestants on “Pimp my Rickshaw”,lots of silver, bling and tassels but they go about half the speed as the normal ones. I think the combination of my cold preventing me from being to breathe through my nostrils and the persistent aggressiveness of all the touts gave me a spot of sense-of-humour-failure yesterday and by 4pm I was thoroughly sick of the whole place and came back to my guest house for a nap!

Meherangarh Fort
On the positive side though Jodhpur’s fort is really impressive and enhanced by the one thing this country does supremely well, an audio tour. As for the last one I used, it was included in the foreign entry price, and it was brilliant. The English narrator had a wonderfully resonant voice in which he departed information on the museum exhibits, stories from the era of the Rathore Kingdom, tales of closeted women, powerful chiefs and bloody sieges. To give the fort some context imagine you are a weary moghul warrior riding your camel across the inhospitable Thar desert, around 1520. The hilt of your curved sword digging uncomfortably into your waist, your nuts getting squashed into the saddle and sand settling on your not-so-immaculately groomed beard.

Ahead of you in the distance you finally see Meherangarh. Dark sandstone rock rises up 400 metres giving way to sheer walls of red with rounded turrets gazing out across the landscape. Huge wooden doors bar the entrance, studded with deadly metal spikes to prevent the charging of elephants. Hidden inside there is a world of opulent luxury, interconnecting courtyards with scalloped archways and elaborate lattice windows hiding the watchful eyes of hundreds of beautiful, jewelled Maharanis.

Driving up in the rickshaw the first thing I thought about, strangely, was ‘Mysteries of Udolpho’, although clearly Rajasthan is a million miles away from the gothic intrigues of 16th century Tuscany I though Ann Radcliffe would have been suitably inspired by the impenetrable stone walls and lofty setting.

I spent the rest of the day eating some really good street food from the vendors around the clock tower and tried a makhania lassi, made with saffron, which looks like custard but tastes delicious. Then I ignored the tourist spice and souvenir shops and got lost in the old part of the town between the Brahmin blue painted houses passing the goldsmiths, silversmiths, spice sellers and bangle shops. Back near the clock-tower I got a pimped but slow ride back to my guest house and the sanctuary of my room.

The smell of garlic battled through my blocked nostrils and woke me up a few hours later and I wandered down to the kitchen only to be roped into pea shelling and aubergine chopping for dinner. They cook one mean thali at this place and the owner and his cousins are very amusing. They are all camp as chips, and there is a picture of Elton John in the reception saying “Out and Proud.” And yet they are all married. Very bizarre.

British Exports
Now I know the British have certainly left their mark on India; bureaucracy, imposing architecture, driving on the left, a fondness to create clubs for anything imaginable and ongoing religious and international relations issues with Pakistan due to partition, but given that we all left over 50 years ago explain to me how David Jason and Only Fools and Horses have become inter-twinned in the Indian tourist banter? From the cockney talking shawl selling ladies on Goan beaches, to rickshaws with Lovely Jubbly inscribed on their fronts, to this gem on the road in Jaisalmer. It’s only a matter of time before they start painting the rickshaws yellow and calling each other Rodney! 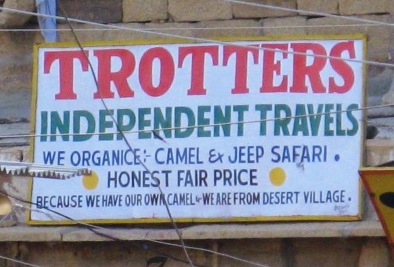 This entry was posted in India. Bookmark the permalink.