troubled past and the hedonistic present

The journey to Cambodia I think will go down in my memories as the hottest, sweatiest day of my life. Two cramped boat rides down the humid, sun soaked Mekong, a very efficient border check and then another boat ride and a final 90 minutes by bus to deliver us into the centre of Phnom Penh. I fell asleep on the bus with my forearm stretched out across my leg. When I lifted it up there was a wide sweaty damp streak underneath. Tasty!

The Nightlife of Phnom Penh

Phnom Penh reminds me a lot of Bangkok without the the huge shopping malls and Skytrain. It’s really quite at the moment as most places as closed over the Cambodian New Year, although despite that we’ve managed to find some excellent restaurants (how can I describe the wonders of deep-fried Mozzarella after months of Dairylea slices and plastic cheese) and some very entertaining late night bars. Yesterday we spent the day wandering around the centre, visiting a small sleepy temple called Wat Phnom at the top of a small hill and vegging out in a lakeside bar.

We’d had dinner and a few drinks along the riverside strip and Rob refused to go home until we’d had one more for the road so we asked our tuk-tuk driver to take us one somewhere else. I think we ended up in what must surely be the only lesbian run bar in all of Cambodia. Seriously! I had my boobs poked by our very friendly bar woman who told us she slept with her girlfriends and didn’t like men. Needless to say it was a rather entertaining evening!

We got back to the guest house about 3am and Rob and Mika both collapsed on their beds. I was marching over the three beds complaining that they were being boring whilst “Pretty Fly for a White Guy”was playing on the speakers. As I stomped my foot onto Mika’s bed the whole end of it crashed through onto the ground! I laughed until there were tears! We sort of fixed it but it will no longer support anyone’s weight. Oops. This, boys and girls, is why your mother tells you never to jump up and down on the bed.

This afternoon we went to visit the Killing Fields and S-21. These two sights represent the horrific regime of genocide that was implemented by Pol Pot and the Khmer Rouge between 1974 and 1979 in his attempt to create a Maoist-peasant dominated agrarian co-operative. The entire population of Phnom Penh was driven out of the capital to work on forced labour camps in the countryside, hundreds of thousands were executed and still more died of famine and disease. S-21, formerly a school was converted into the main torture and detention camp, also called ‘Tuol Sleng’ which means a posionous hill to keep those who bear or supply guilt. 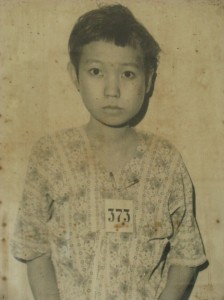 About 27,000 men, women and children were detained at S-21 and then taken out to the extermination camp at Choeung Ek outside the city (the Killing Fields) and machete’d to death (they didn’t want to waste precious bullets by shooting the victims). Choeung Ek is now a rural, peaceful area, with bright flowers and the sounds of birdsong. There is a large stupa which houses 8000 skulls exhumed from mass graves around the area. Even so, it is hard to imagine the atrocities that took place.

S-21 I found far more upsetting. It still looks like a school with a leafy courtyard, white flowering trees, checkered floor classrooms and balconies; but the exercise bar was used to torture detainees and the classrooms were the cells for holding thousands of prisoners, administering lashes, electricity and other torture methods to extract confessions. The prisoners were mainly Cambodian, from all over the country and from all walks of life. It was not only the individual who was guilty, their whole families from the elderly to babies would be taken for extermination.

The rooms now show the blank expressions of the men, women and children taken there. Some show the bloodied faces and emaciated bodies in horrific detail. There were rooms in which narrow brick cells had been built within the classrooms to keep certain prisoners in isolation. It was a very thought-provoking and very harrowing afternoon. All three of us were very quiet in the tuk tuk driving back.  As we passed through the streets we could see families lying around their porches in the shade, children running around on their bicycles, young guys posing by their motorbikes, girls with hilights and heels chatting on new mobile phones and groups of men laughing and playing cards. As we paid our driver he smiled and said “Happy New Year” before driving off. Whatever horrors lie in the recent past Cambodia seems, at any rate, to be positively rushing forward into the future.

This entry was posted in Cambodia, history. Bookmark the permalink.