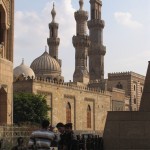 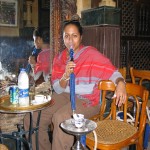 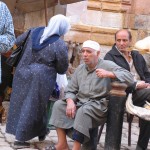 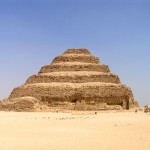 Another year, another trip and this time my brother and I thought we’d go together, despite not having been on holiday together for around eight years. And surprisingly we didn’t argue and had a fantastic time even if I did pretty much loose every game of cribbage (4-2 up in Scrabble though!)

We began our trip playing computer games with the traffic in Cairo, the most densely populated city in the world (it feels like). Very crowded, a little crazy, but fascinating. We rode camel and horse around the famous pyramids at Giza and I very nearly fell off – cantering in flip flops – not such a hot idea. We strolled around mosques and the souk in Islamic Cairo and everybody thought James was Egyptian. We spent a morning in the Egyptian museum marveling at the sheer amount of STUFF in there, all the treasures of Tutankhamen, and the very spooky royal mummies

We caught the overnight train down from Cairo to Aswan, a slight slowing in pace from the hectic nature of the captial. We spent a leisurely morning sailing around Elphantine island and Kitchener island on the Nile before getting lost in the Nubian villges. 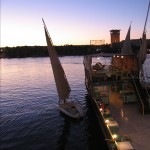 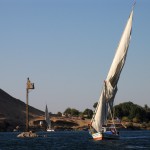 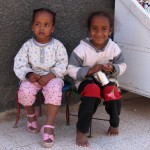 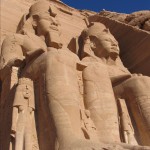 After persuading James to get up at 3am we took a mini trip down to see the immense temple of Ramses II at Abu Simbel in the early morning sunshine overlooking Lake Nassar. Officially dedicated to the most important gods of the Kingdom; Ptah, Amun-Re and Re-Harakhte, but given the four giant statues of Ramses outside as well as numerous victories and glories featuring the pharoh inside, one might be forgiven thinking that the temple was more a dedication to himself! Next door he did build a beautiful, if slightly smaller, temple for his wife, Nefertari. Afterwards we drove back north and stopped at the relatively tourist-free temples of Philae, a temple built for the goddess Isis. 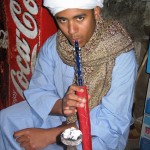 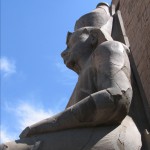 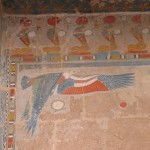 Luxor on the banks of the Nile. We spent a day exploring the East bank at Luxor temple and Karnak before walking back into town at sunset avoiding the Felucca touts and replying for the millionth time that no, James wasn’t Egyptian, nor Nubian, nor Sudanese! We befriend Zacharia in a local shop and had tea and shisha while him and his friends dressed James up in a traditional Gallabah.

The following day we took a mini tour, with a very entertaining guide, over to the West bank and where all things were to glorify the dead; we began with the Colossi of Memnon, the beautiful princes’ tombs in the Valley of the Queens and then the magnificent and breathtaking paintings in the tombs of Ramses IX, Ramses IV and Ramses I. Then we visited Deir el-Bahri, the temple Queen Hatshepsut, the only woman to rule as Pharoh, having sneakily assumed the throne from her infant son Tuthmosis. 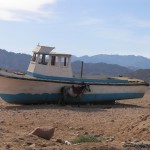 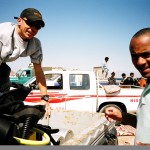 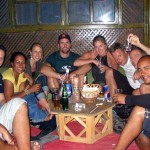 After a slight mishap with the canceling of the boat across from Hurghada to Sharm El-Sheik, we managed to squeeze into the final seats of an overnight bus to Dahab and, by eleven the following morning, were relaxing happily with lemonade on the banks of the Red Sea . After all the temples, tombs and pyramids it was nice to have five days of resting, relaxing, diving…and a spot of partying (but I entirely blame that on the Kiwis)!