One of the wonderful things you can do with a spare week of holiday and the internet is play the cheapest holiday wins game. So take three girls; myself Nicky and Rachel, take a week in July 2006, a budget of £300 and plug it into the internet. The other foolishly left me in charge and as a result I obviously picked the furthest and most off the wall destination I could find. A few days later I emailed the girls, told them to stock up on Malaria tablets as I’d found a bargin deal for one week in Bakul in the Gambia during the final week of their holiday season. 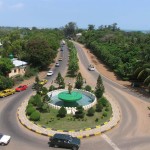 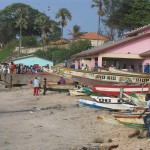 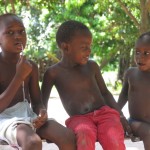 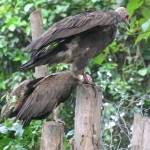 The Gambia is a bizarrely situated country, a slender wedge of land nestled in the midst of Senegal along the Atlantic coast of West Africa. Its borders allegedly were set by a canon’s flight from the river that runs almost it’s entire length. The country’s modest tourist industry is predominantly located in a series of hotels in Bakul, just south of the capital.We stayed in the African Village which, well the name gives it away.

People in the Gambia are massively friendly, the only drawback to which is a degree of over-friendliness. Groups of young guys hang around outside the hotels to befriend/guide/sell drugs to/chat up or with any foreigners emerging. In a bizarre twist to the usual sex tourism stereotype the most coupling seems to be middle aged of older white women with young toned Gambian men! We befriended a taxi driver who became our unofficial guide guide, taking us on trips to Abuko National Park and the local markets in Banjul. We also took advantage of a Nigerian guy who worked in the hotel who took us to visit the local crocodile pool and fish market. 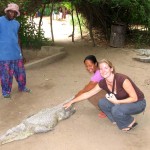 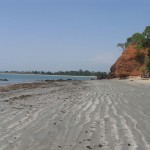 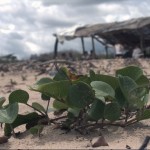 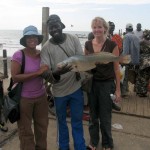 The local croc pool is an important part of Gambian village life. It serves a quasi religion/ritualistic role and is basically a well tended large pond and surrounding area which holds up to 100 crocodiles. It’s quite  an initial shock to walk up just seeing the algae covered pool and then realise that the ground around you is be occupied by 20 or so large dozing crocodiles. They are very well fed and for the most part extremely lazy and seemed largely unperturbed by the odd visiting tourist.

We also took a day trip over the border into French-speaking Senegal via Jinack Island. We walked across the island for our return boat trip to the Gambia while our passports mysteriously disappeared with the truck driver to make the official border crossing – for some reason our presence wasn’t needed for this transaction! En route we crossed several similar fields of a low growing green plant. One of the women looked puzzled and then asked her husband what crop they were growing.

“It’s Marijuana, darling,” he replied rolling his eyes.
“Don’t be ridiculous dear, you don’t have illegal plants just growing in a field for anyone to see.” She snapped back.
Clearly in the Gambia, you do. 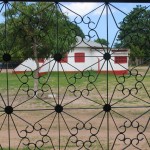 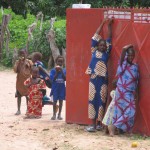 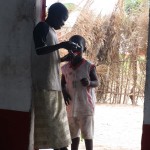 My favourite trip in the Gambia was a day we travelled by truck through the countryside in the south of Bakul visiting a countryside school and ending up with lunch on the beaches of South Komombo. The coastline was an long strip of white sand, waved with different colours, snaked with large leafed vines and backed by dark red cliffs. So much more impressive than palm fringed white sands, for me anyway.

Finally I can’t mention the Gambia without a passing comment to the time keeping. Whenever organising a taxi or an excursion everyone would add on GMT afterwards.