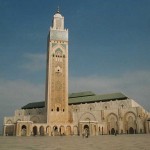 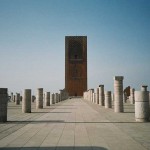 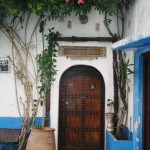 Our brief beginnings in Casablanca had time to take in the impressive Hassan II Mosque with the highest minaret in the world at 200m.. Proof that a monarchy and $800m donated from your faithful subjects can compensate for a lifetime of insecurities. It is a very large and impressively beautiful minaret. How they keep it clean with all the pigeons is another mystery!

An hour or so journey up the cost from Casablanca is Rabat, the political capital of Morocco. We strolled around the medina and the cities souks, the streets were surprisingly empty as only crazy tourists are dumb enough to walk around in the full glare of the early afternoon heat! We visited the Hassan Mosque in the city with the ancient minaret facing the newer Royal mosque across a walkway of roman columns from the site of Volubilis. Royal guards stood impressively outside the entrance of the Mausoleum of Mohammed V in their Arabian nights white outfits. We also walked around the Andalucian style streets of the city’s Kasbah des Oudaia with beautiful wooden and iron doors set among blue and white painted walls. 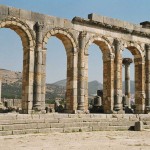 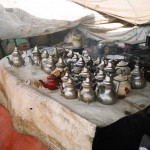 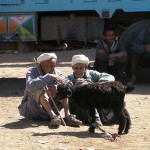 En route from Rabat we sopped at one of the local markets in the country, parked our bus near the Berber limos (mules) and had a stroll around. A very bizarre mixture of cooking pots, sheep, clothing, spices and even a Berber barber shop where a little toddler was having his mop top trimmed on his mothers lap!

A Roman city built overlooking the surrounding countryside dating back to the 3rd century AD. We walked through the boundaries of ancient houses, roman brothels and market places and saw the still preserved mosaics depicting the ardours of Heracles and the journeys of Odysseus. 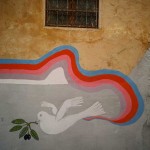 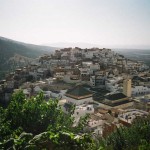 Moulay Idriss, a descendant of Muhammed and founder of a significant Moroccan dynasty. The white walled town nestles in the hills overlooked by the ruins of Volubilis. The mosque has the only round minaret apart from Mecca and is described as the “Poor man’s mecca”. Five pilgrimages to the holy sites in Moulay Idriss are considered equivalent to one pilgrimage to Mecca. 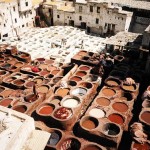 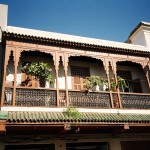 The old city in Fez is like one huge rabbit warren of passages, buildings and mosques. Donkeys and mules staggering heavily laden through the passageways and dead goats hanging up in doorways. You could never find your way around without a guide. It was crazy and incredible, like stepping back into the 14th century. We saw leather being soften with pigeon excrement and died with natural dyes of henna, poppy and indigo in the tannery, mosaics being laid out and all dressed up in djellabas. The second evening I also got to inact my revenge on pigeon populations by eating one in a very nice Pastilla, yummy!

Stopping to feed some wild monkeys and lunch by a river we travelled over the high atlas mountains and the middle atlas mountains on the way down to Er Foud in the desert. We arrived tired and hot but then got taken out to a local house for dinner. We had Tajine, berber pizza, mint tea, watched Donna strut her funky stuff to some local music and were entertained by the tiniest son of the family running madly from door to door but too shy to stop and say hello to us! 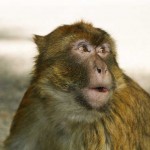 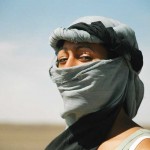 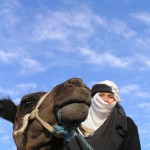 Driving for an hour over dry scrub desert we could see the almost-unreal dunes on the sahara stretching out in front of us. We lounged on cushions under the tents bordering the sands, went camel riding to watch the sunset, drank wine and baileys as the full moon rose, went for a night stroll to watch the stars, slept out under the sahara sky and woke up at dawn to watch the sunrise!

Next stop the Todra Gorge. We spent the evening sitting under a huge tented area nestled into the side of the gorge. On each side 300 metre high orange cliffs rose up into the sky. The strip of fertile farmland running down the centre had narrowed into a small pebbled stream running down from the heights. We did a morning hike up over the gorge to view the plains and the anti atlas mountains beyond, then walked back through the local fields of figs, pomegranates, dates, palms and cabbages. I also discovered my favourite arabic proverb: “If Allah listened to the dogs it would rain bones.” 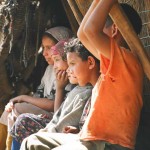 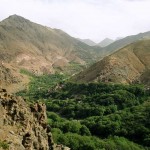 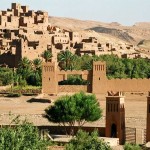 Ait Benhaddou: as seen in Gladiator and Lawrence of Arabia. A huge ancient and very impressive Kasbah that sits on the hillside.

In the high Atlas mountains we walked for an hour up through villages and walnut trees, the donkeys carrying our day packs up to a small hill side village called Armad in the mountains. The first snowfall of the year had covered the peak of Jebel Toubkal behind us. 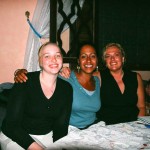 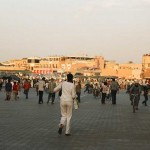 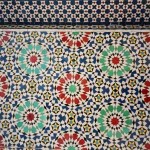 The final destination was Marrakesh, a town full of souks, parks, old mosques, horse drawn carriages, dinner stalls, snake charmers and fortune tellers. Joedi bargained ferociously with stall holders earning herself the nickname – the Blond Berber whilst Kate and I were accosted by the bizarre pronouncement, “You, small tits, small price!” Charming! We ate street food from the stalls in Jemaa el Fna square, drank endless glasses of mint tea, shopped and finally said farewell to the enchantment of Morocco.