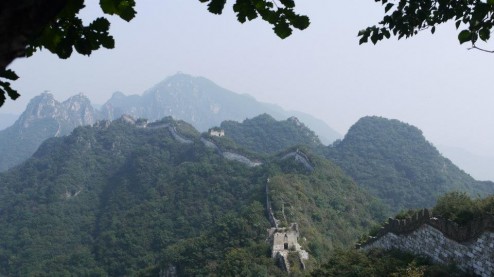 Our final activity in China was to take a two day hiking trip out onto the Great Wall. It’s hard to really describe the incredible feat of construction that is the Great Wall of china. We visited a rather secluded area at jinxou where the wall has not been restored so the surrounding forest is crawling over parts, erupting through the stone and crumbling sections into the countryside. The wall itself follows the highest ridge as it zigs and zags over the hill tops creating the most incredible views and routes. 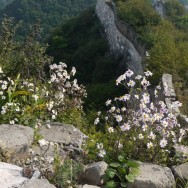 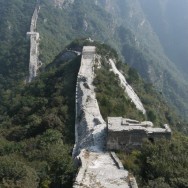 Every watchtower we reached and every corner of the wall we turned seem to open up a completely new and equally stunning view of the wall. We camped overnight in the shadow of wall and the next day had the ‘adventurous’ part of the hike. Sections of the wall narrow so much you can grab both sides with your hands and so steep you struggle to get up each tall narrow step. On the other side of the wall the forest drops straight down into the valley hundreds of meters below. Parts of the wall has also almost completely crumbled away. Instead of steps a near vertical wall of uneven rock face confronts you. So we did some hair raising rock climbing, scrambling through the forest and gazing down at vertigo inducing views. 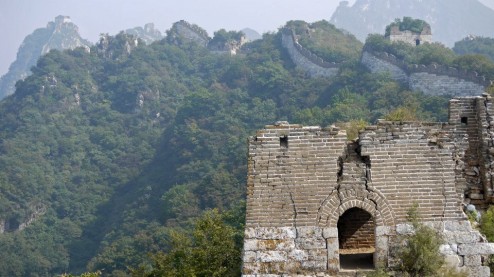 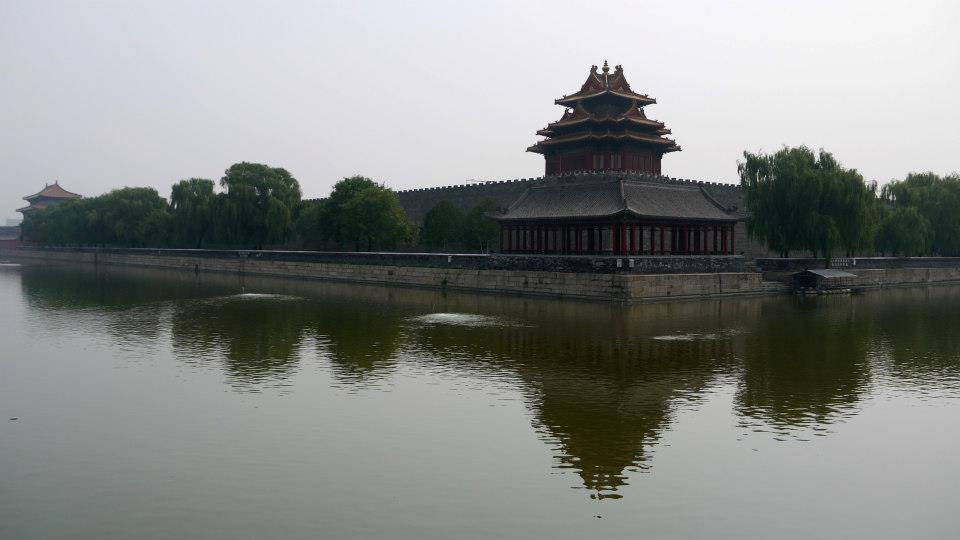 Beijing looks and feels very different to shanghai. The skit line is less dominated by huge skyscrapers, there are more traditional buildings, more traffic, and the mandarin is layered with rrr’s, almost as if the Chinese came via Cornwall. I’d picked the Emperor hotel as the Roof terrace over looked the forbidden city and up to Jingshing hill. Our room was named, as all the rooms, after a Chinese emperor. Ours Chong Zhen, the last emperor of the Ming dynasty who famously hanged himself from a tree in Jinshin park.

Our next day we walked up to the temple atop this park to look down overt the rooftops of the forbidden city, via trying on some rather fetching outfits, before spending the rest of the day walking in the footsteps of courtesans, eunuchs and emperors of five hundred years ago. 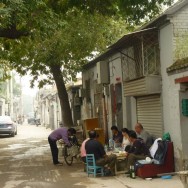 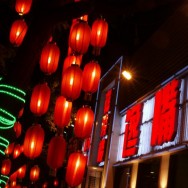 Beijing has many faces. From the beautifully tiled buildings and sculpted gardens of the forbidden city, to the traditional grey stone Hutongs creating hidden mazes and courtyards, quiet lakes, to the high rise glass towers downtown where we had amazing Peking duck at DaDong, to the red lantern lined Ghost street with steaming bowls of Mongolian hot pot. We also went out to an art district on the outskirts of the city centre called District 798 with Viv and Trevor. A huge area or former industrial buildings and factories that now house sculptures, galleries, cafes and shops. 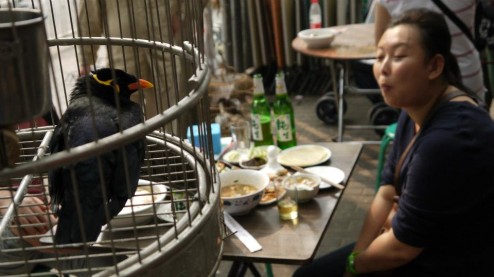 We arrived in Shanghai just at sunset after a five hour delayed flight from Amsterdam. We fled straight from our hotel, Casa Serena, down to the Glamour Bar on The Bund to join Viv’s birthday celebrations and watch the myriad of light displays across the glass skyscrapers across the water in Pudong. 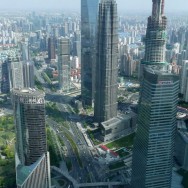 Downtown shanghai, seen from the glass floor of the oriental pearl looks like a scene from a sci fi film. Glass, greenery and steel in a landscape that seems to change by the month. Further away we had brunch at Kommune, a brunch spot in Tai Kang road’s maze of gift shops, galleries and cafe across town. The menu adorned with a retro illustration of the communist ideal. Not sure that Mao would have approved of the tongue in cheek reference! We spent mornings in Fuxing park watching the city’s elderly ballroom dance practice tai chi or sing in outdoor choral sessions. Watched fluffy white dogs with orange dyed ears and wearing converse trainers strolling along the pavements. 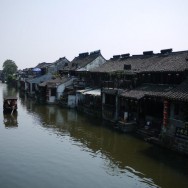 Before leaving for Beijing we took a day trip out to Xitang, a water town, with Viv’s family and friends. We walked along the waterside under the red lanterns exploring shops and alleyways before lunching and catching an old school long boat back to our start.