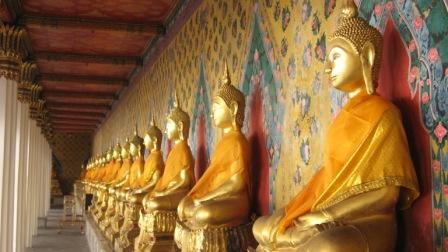 Amazing how the time passes when you are doing nothing. I am thoroughly enjoying have a sabbatical from my sabbatical in Bangkok. The hostel I am staying in Suk11 is lovely, the kind of place where you only have to been there for about 2 days and every time you come downstairs for a beer, cup of coffee or breakfast there are people to chat to. There’s quite an interesting mix of people here as well, everyone from couples with young children from Korea and Japan, first time fresh faced 18 year olds enjoying their first trip abroad to long term residents, the old white bearded guys who randomly work their ways around Asia and I’ve met a French chef, a Canadian Liquid dancer and an English life painter!

I have done some very light sight-seeing though.

I went to visit Jim Thompsons house, an American born in 1906 who came to Thailand at the end of the war and is responsible for bringing Thai silk to the international design stage. He built this beautiful traditional style house on the banks of Bangkok’s canals and you have a cute half hour guided tour before going to drool over silk scarves in the shop afterwards. Then yesterday before picking my brother up from the airport I got a boat up the river to Wat Arun, the dawn temple which looks unimpressive from a distance but is fascinating close up.Every inch is covered in ceramic mosaics of all colours shapes and sizes. A little like someone has smashed up their mother’s china sets and used them to decorate a Buddist stupa! Having seenBuddist temples in Sri Lanka, Nepal and India it’s interesting to see the differences in the Thai architecture. There is more detail, and a lot more curves and points sticking out everywhere. The monks are also back in orange (as in Sri Lanka) rather than the deep maroons and reds of Nepal and India.

On Wednesday I went to pick up my Vietnam visa, the easiest visa I have ever had to get. Virtually no queue and very efficient, after the Indian Embassy debacle I am permanently visa paranoid! I came out of the embassy and walked past a hairdressers, stopped and stood contemplating an idea for a good five minutes in the middle of the pavement before turning around, walking through the door and asking them to cut off all my hair! My hair has been driving me mad for ages, ten months without a hairdresser and no heat styling within range is not a good combination. I think the stylist found the whole experience fairly traumatic, the average Asian head of hair is definitely a world away from my psuedo afro mop! It is now pretty much as short as when I was 18, although curly and once the initial shock wore off I’ve decided kind of like it, plus it’s so much easier to deal with. I went to the market to buy some hair bands, and decided I don’t look too much like a boy! Anyway, in a month or so it’ll be longer and then the fro will finally be back in force!

This entry was posted in temples, Thailand. Bookmark the permalink.