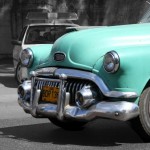 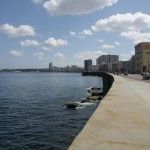 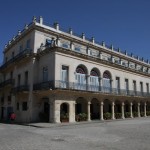 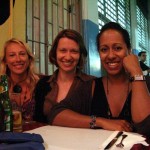 Finally at the end of our trip we ended up back in Havana, staying in Varadero just down the hill from the rather majestic front of the Universidad de la Habana. I loved Havana. Varadero is a residential area of wide streets, crumbling old colonial house, cracked pavements and shady trees. From here we could walk along much of the length of the Malecon, the road along with sea wall that sweeps around and up to Habana Vieja. We had some very good food in a leafy plaza, browsed the book stalls and craft markets, wandered through romantically run down streets, smoked cigars (well just me), drank amazing hot chocolate and caught a few local bands playing for afternoon mojitos. We achieved full propaganda overload at the Revolutionary Museum although I did adore the prominent “Wall of the Cretins” in the entrance hall featuring cartoons of Batista, Regan and Bush thanking them for helping to Cuba to make, strengthen and consolidate their revolution! We also spent a morning in the Cuban Modern Art section of the Museo de Belles Artes which has some really wonderful, really weird and really interesting displays of Cuban Art through the decades. Our final night in Cuba was spent in the magnificent Gran Teatro watching a Cuban performance, in Spanish, of the Magic Flute. It was undoubtedly the funniest and most entertaining opera performance I’ve ever seen!

We left our final Cuban experience for our final hours before catching the flight home. We went to visit a Coppelia ice cream, a Government-subsidised ice cream chain aimed at keeping the communist masses happy. We queued up for about 40 minutes to get a table and then tucked in to a spread of six heaped bowls of excellent ice cream and three bowls of cake. Incredibly unhealthy and completely wonderful! 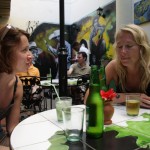 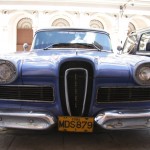 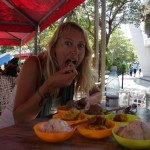 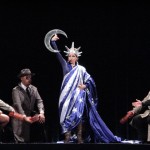 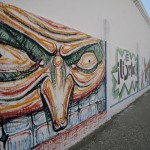 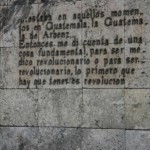 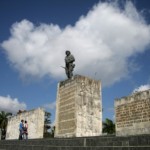 In Santa Clara we had Che day,a whole day devoted to the poster boy of the Cuban revolution Ernesto Che Guevara. We walked out to visit the moment, mausoleum and museum to El Che and of course the legendary (in Cuba certainly) train which Che and 18 men overcame on the 29th Dec 1959 despite the fact it contained 350 heavily armed Batista troops! We also came across a wonderful wall of Cuban political comic strips, all very anti-American in sentiment and very interesting. A Colombian friend we’d met on the bus turned up in a restaurant that evening which somehow led to Kristy and I going out clubbing in an old ruined house to Cotton-Eye Joe and Gangsta’s Paradise with an entertaining group of Cuban students. It’s always the most random nights that are the best!

Trinidad is a small and very beautiful colonial town near the south coast of Cuba. The centre is full of cobbled streets, brightly painted buildings with ornate iron grills and red tiled roofs. Above the main plaza there was a wide flights of stone steps with a large area half way up. On Saturday night we spent most of the evening sitting on the steps along with apparently everybody else in Trinidad listening to a local salsa band and dancing along with the locals with the help of two new-found friends from Santa Clara who were lovely and very patient! 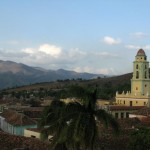 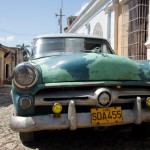 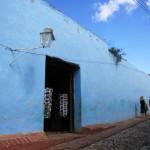 We managed to persuade Caz to try horse riding for the first time and we organised a trip out to a nearby farm. Unknown to us, the pleasant mornings ride would actually wind all the way up a series of highly steep stony paths in the hills and then all the way down equally steeply. Not the ideal terrain to be on a horse for the first time. Caz managed to look fairly calm during the ride but afterwards quite definitely announced that she didn’t think it was the really the activity for her! Afterwards we walked an hour through the forest to a small waterfall that fell into a wonderfully refreshing swimming hole where you could swim into the cave behind and look up at the stalactites or jump off the nearby rocks into the depths. I managed to face plant into the water whilst doing this which looked particularly graceful!

Trinidad is only 11km from Playa Ancon, a sandy peninsula with a few large all-inclusive hotels along the stretch. We spent the day further down from the main tourist area in a quiet stretch of rock strewn white sand. The girls happily read and worked on their tans and I spent the whole afternoon drinking Mojitos and playing a highly competitive game of cards with a Canadian guy called Mike who stayed in our Casa for a night. He taught me a brilliant card game, the name of which is a mystery but the girls later christened ‘Mike’ in his honour! 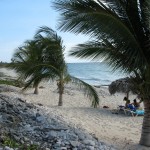 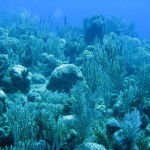 The next day Kristy and Caz headed off to an offshore island of large Iguanas and I went diving for the day. The reefs around Ancon are cute but not quite the proliferation of colourful corals and fish that I’m used to. I still enjoyed the dives for the whole underwater environment and I did get to see a giant crab and lobster as well as playing around with Dad’s underwater camera housing! By the time I got back from the second dive and took off my short wetsuit I discovered my legs had helpfully tanned a very dark shade of brown below the suit line and the stripe was incredibly obvious. I decided to find a small palm tree along the beach and lay with my legs in the sun but with SPF30 on the bottom bits until the tan had evened out a little!

Here are some of my favourite photos from my Cuba holiday. It is a fascinating, friendly country with a bizarre combination of Latino spirit, Caribbean cool and communist control! We went from Havana to Santiago de Cuba, Trinidad, Santa Clara and back to the capital via many Casa Particulares, several Casa de la Musicas, a few buses, a beach, one terryfying (for Caz at least) horse riding trip, town plazas, waterfalls, ice cream, hundreds of eggs, castles, a black virgin and a whole lot of salsa. Details on the full trip to follow!

Santiago de Cuba
We flew from Havana straight down to Santiago de Cuba in the cutest plane that I have ever seen – complete with painted on beach and palm trees. Our brief hosts in Havana had humorously described Santiago as hot, in more ways than one. The men, we were told, are good for a night, and not good for much more. Intriguing if nothing else!

Santiago de Cuba is an easy-going relaxed colonial town, we pottered around a few museums and galleries, visited the unassumingly beautiful Cementerio Santa Ifigenia and its bizarre Monty Python style changing of the guards and relaxed in Plaza de Dolores and Parque Cespedes conducting important research into Cuba’s finest beverages; Cristal (a light, tasty lunchtime beer), Bucanero (a slightly stronger beer with those of hardier tastes), the Mojito (a Cuban classic drinkable at literally all times of day), Pina Colada (personally I don’t see the necessity of spoiling the run with so much fruit but the other’s liked them) and finally the Daiquiri (see Pina Colada)!

It would be impossible to speak of Cuba without mentioning dancing and music in the same breadth. There seemed to be some kind of band playing wherever we walked during the day and so finding some live music in the evening was certainly not hard. In the Casa de la Musica we were hijacked by a huge family of Cubans’ distributed among the older men for dance partners and eventually ended up in another bar drinking neat dark rum with the band’s two bongo players, salsa dancing and in my case speaking increasingly more recklessly confident Spanish. The next morning the lady who owned the Casa Particular (private house) we were staying in, brought us two thermos flasks of coffee looking highly amused! 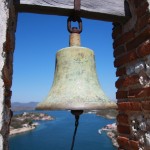 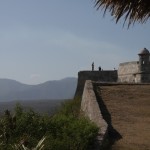 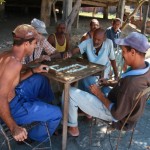 Before leaving Santiago de Cuba (and our already beloved 4pm  mojitos in the Casa de Te on the main square) we hired a car for a few hours. The car was an extremely battered piece of engineering in which was squeezed Rafael, a quiet guy with a stomach the size of Mount Olympus which he liked to expose to the elements, rolling up his t-shirt and letting the brown mound bask happily in the sun.

Rafael and his stomach drove us down to the Castillo de San Pedro del Morro, a seventeenth century fort built overlooking an endless expanse of ocean. We walked along the battlements and attempted to decode the Spanish stories of pirates, invaders, Corsicans and bandits of Cuba colonial past. We also took a small boat over to the nearby island of Cayo Granma where the only afternoon activity was a serious game of dominoes taking place on the main path.

Our other excursion out of the town took us to Cuba’s holiest site. Communism and religion aren’t usual bed fellows but since the Pope’s blessing in the past decade Christianity has apparently persisted under Fidel. The Basilica de Neustra Senora del Cobre is a fantastically situated church nestled among green hills and houses the Yoruba godess of dance and love. Cubans come here to pray and if those prayers are answered return to leave tokens of thanks. These tokens, all on display, included everything from locks of hair, graduation scrolls to olympic medals.