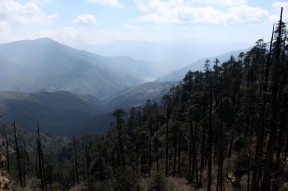 Our next trip was a five day hike across the mountain passes from Paro valley to Thimpu valley. With a small army of ponies and porters we set out from above Paro valley hiking through rhododendron forests in the sunshine, along hill  ridges and passing isolated monasteries. The campsites had toilet tents, carpets to sleep on, a dining tent and roast potatoes with dinner. Utter luxury. Not to mention being woken up by hot tea or coffee and warm water to wash your face. 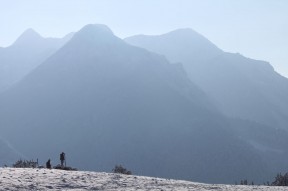 On the third day we experienced an unusual turn of weather for the time of year. A light flurry of snow in the late afternoon soon became a heavy snowfall. The last sound before drifting off to sleep was the sounds of our porters brushing settling snow from the tops of all our tents. We woke to a winter wonderland. Blue skies, bright sunshine and over four inches of crunchy virginal snow. The ponies were huddled under the trees looking decidedly unimpressed along with a heard of yaks that had wondered onto the plateau the previous evening. We ate breakfast in the open air at our campaign table surrounded by white peaks and blue skies. Although beautiful the snow meant we had to head back down the valley. This was fine until we got below the snow line and then had a three hour slip and slide through thick mud before reaching the bottom! 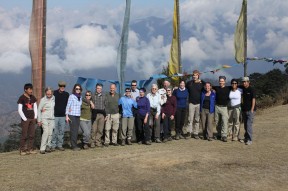 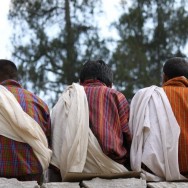 Bhutan. The Land of the Thunder Dragon. One of the world’s youngest democracies, a hidden kingdom nestled in the Himalayas between China, India and Nepal. A small population of people who believe in the importance of Gross National Happiness, driving economical growth but preserving their culture and ecosystems and who wear traditional dress while driving to work in their new Japanese cars. Where century-old monasteries nestle on the precipices of towering cliff faces, prayer flags flutter on the slopes above the towns, and demons and saints walk through the everyday stories of the country’s history and culture. 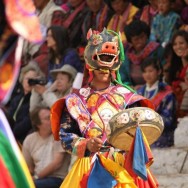 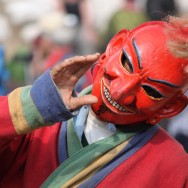 Our trip began with one of the most unexpectedly unsettling landings I have ever experienced in a plane. I hadn’t been aware that Paro airport in Bhutan is one of the most dangerous airports to land in the world and few pilots are qualified to make the landing. The sharp turn during the dissent whilst almost on the runway and the very sharp breaking was a bit of a shock to the system.

Our trip began in Paro, nestled into the Paro valley, populate by large traditional Bhutanese houses with painted wooden eaves, white walls and painted animals on their walls. We visited the Paro festival, an annual Buddhist celebration of music and dancers, and one extremely large scroll. The locals (and tourists) gathered in huge numbers in their finest traditional dress to watch the vibrant performances. We even got to briefly see the King, coming out of the Paro Dzong on the final day of the festival he stopped to talk to the waiting crowd and thanked us, eagerly hovering near the front, for visiting his country! 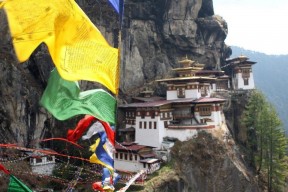 From Paro we spent a day visiting the beautifully if perilously situated Tiger’s Nest Monastery. It was a steep but scenic climb up the hillside past woods and fluttering prayer flags to reach this Buddhist sanctuary gazing out across the valley.